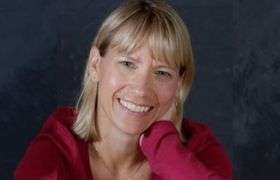 Jenny L. Clark, OTR/L, BCP (AOTA Board Certification in Pediatrics) graduated from The University of Kansas in 1990 with distinction and has helped children over the past 28 years as a licensed pediatric occupational therapist working as a speaker, consultant, private practitioner at her own clinic (Jenny’s Kids, Inc.), school-based occupational therapist, independent contractor for early intervention services, author, and inventor. Jenny received certification from Aura Wellness Center as a Kids Yoga Teacher in July 2017.

Her passion for developing new approaches to therapy can be seen in her diverse contributions to the field, including: the evidence-based curriculum material Learn to Move, Move to Learn: Sensorimotor Early Childhood Activity Themes (AAPC 2004), and the sequel Learn to Move, Moving Up! Sensorimotor Elementary School Activity Themes (AAPC 2009); two DVD’s Learn to Move: Dinosaurs (AAPC 2005), a companion to her first book, and Sensory Processing Disorder Kit: Simulations and Solutions for Parents, Teachers, and Therapist (AAPC 2006), which won the 2007 media in excellence video award from Autism Society of America; a music CD, Sing, Move, Learn (AAPC 2010), which accompanies the songs in her first book.

Jenny was a contributing author for the book Autism Spectrum Disorders: A Handbook for Parents and Professionals (Greenwood Publishing Group 2007), as well as the author of a chapter in Autism Spectrum Disorders: Foundations, Characteristics, and Effective Strategies. (Pearson Publishing 2011). Most recently, Jenny was the technical reviewer for The Everything Parents Guide to Sensory Processing Disorder (Terri Mauro, Adams Media 2014). Jenny is the inventor of the patent-pending “Weigh” Cool Bracelet (www.abilitations.com) and her most recent creation, Letter Treasure Hunt handwriting game (Therapro 2014).

No courses were found. Please check the conferences page to see all courses.

No courses available from this presenter at this time.

Ready to advance your career?

Register for a Course Today

Want to get notified about future courses?